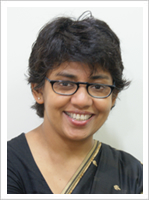 Prashanthi served as a Prosecutor at the United Nations War Crimes Tribunal, The Hague, Netherlands (UNICTY) for 10 years - conducted high level war crimes prosecutions, such as the crimes committed in the siege of Sarajevo, the shelling of Dubrovnik, ethnic cleansing in Croatia and the case against the former President of Serbia, Slobodan Milosevic;

Served as State Counsel of the Attorney General's Department of Sri Lanka for 10 years, litigating civil, commercial and labour disputes in addition to conducting criminal prosecutions. Conducted the high level prosecution in the case of rape and murder of Krishanthi Kumaraswamy and the murder of her family members by members of the Sri Lanka Army.

Appointed Honorary Legal Advisor to the Prime Minister of Sri Lanka on Human Rights and Accountability in October, 2015, and serves as Senior Legal Consultant to the Right to Information Commission established under the Right to Information Act No. 12 of 2016. A Member of the Government’s Working Group on Transitional Justice and Reconciliation Mechanisms (Tasked with the formulation/development of transitional justice and reconciliation mechanisms, including development of accountability mechanisms); Co-drafted the Office on Missing Persons (Establishment, Administration and Discharge of Functions) Act No.14 of 2016;