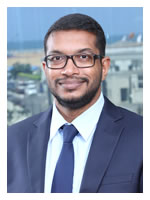 Shanaka has handled several challenges of draft legislation before the Supreme Court of Sri Lanka. He is also a leading junior in product liability matters handled by the Firm in particular tobacco and alcohol related litigation. In his 7 years with the Firm, Shanaka has been lead Counsel in several complicated Customs inquiries which have all been concluded successfully with multi billion rupee charges being dropped. Most recently he led the successful engagement between the firm and Linklaters of London in high profile litigation concluded in favor of an international bank against a Sri Lankan corporation both in the original court and appeal court. Shanaka is also leading the negotiations for settlement of a multi-million dollar dispute between a foreign bank and Sri Lankan regulators. He has considerable experience in labor related litigation in the original and appeal courts, and consistently appears as lead and junior counsel in the Firm's commercial matters.